“The most popular phrase on the gay internet: WHITES AND LATINS ONLY, aka gay racism spelled out in ALL CAPS in case a nigga who’s hard of reading logs on.” —from Rising Up Over Gay Racism

On any given day in America, countless gay men surf the Internet and tell the whole wide world: they prefer WHITES AND LATINS ONLY for love and sex.

If only the US Treasury had one dollar for each online personal ad that contained some variation of the phrases, WHITES AND LATINS ONLY, NO BLACKS, NO ASIANS, SORRY, NOTHING PERSONAL, JUST A PREFERENCE.

When I surf websites frequented by gay men, I’m constantly reminded of images from the Segregation Era of the last century, images of “colored” people standing outside restaurants, restrooms, schools, businesses, bars, nightclubs, water fountains, all with signs warning: WHITES ONLY, NO BLACKS.

From where I stand, the Segregation Era lives on in My Racist Gay World. Welcome to my world. This is what it looks like in pictures.

“Anyone in the world can surf the web and find gay men of all ages and races using the exact same slogans and rhetoric used to segregate blacks in the Old South.” —from Poll Dancing with Blacks and Gays

“What’s with all the WHITES AND LATINS ONLY language on the net? Everywhere you look, fags online are telling the world: I only want white and Latin men!” —from 10 Ways to Get Blacks To Support Gay Marriage

“Never have I encountered more racism than I have in the places gay men frequent, a fact that renders any so-called link to black civil rights laughable.” —from The Hypocrisy of Gay Civil Rights 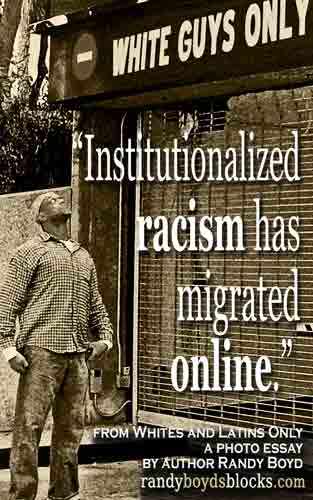 “You may vote for a biracial brutha who’s your only light in dark times, but remember this: you yourself have not come a long way. Your WHITES ONLY “preferences” are keeping the legacy of slavery alive and well, faggots of America.” —from Rising Up Over Gay Racism

“[Gays] ain’t gonna get very far in the polls by shutting out black homos with online language, like, WHITES AND LATINS ONLY. NO BLACKS, NO ASIANS, NO OFFENSE.” —from Dear Queers, Give Black People Blue Jeans!

“If Senators Jesse Helms and Strom Thurman were still alive, they’d be proud of you fags, living up to their stereotypes and upholding their racial values.” —from Rising Up Over Gay Racism

“Gay America possesses a mentality befitting of the ignorant racist ways of the Old South.” —from Poll Dancing with Blacks and Gays 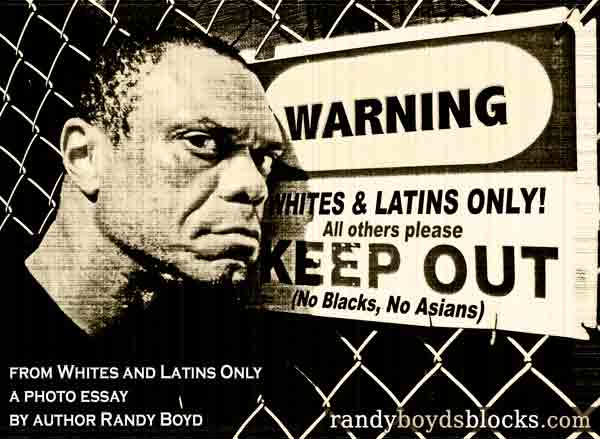 “Makes one wonder if racist gay men are aware of the fact that they’re using the exact same words and logic of those who tried to keep blacks from sitting at the same lunch counters, going to the same schools, drinking from the same water fountains, marrying their daughters.” —from Poll Dancing with Blacks and Gays 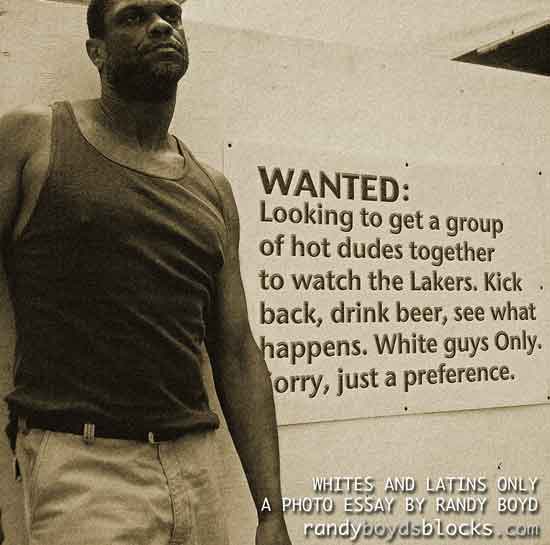 “AIDS is back and bigger than ever, but because infection rates are highest among men of color, AIDS is barely on the radar of the (mostly) white men trying to get to the alter.” —from The Hypocrisy of Gay Civil Rights

“Institutionalized racism has migrated online. Online, the racist minds of countless gay men are transparent and blatant.” —from Poll Dancing with Blacks and Gays 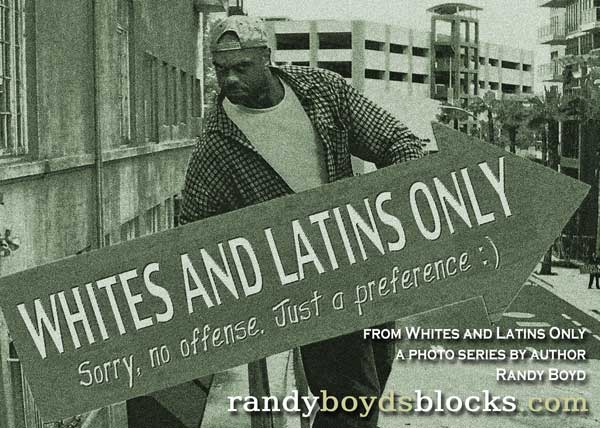 “What universe are we in? Tell us how you really feel about niggers. Oh, wait, you just did, and you do it every single day in ALL CAPS on the world wide web for the whole wide world to see.” —from 10 Ways to Get Blacks To Support Gay Marriage

“Gays, another oppressed minority, are also retarded in their development. Gays are less evolved and more racist than their non-gay counterparts.” —from Poll Dancing with Blacks and Gays

“If fags want to compare their journey for civil rights to that of blacks, I suggest fags stop segregating themselves from blacks by declaring WHITES and LATINS ONLY.” —from The Hypocrisy of Gay Civil Rights 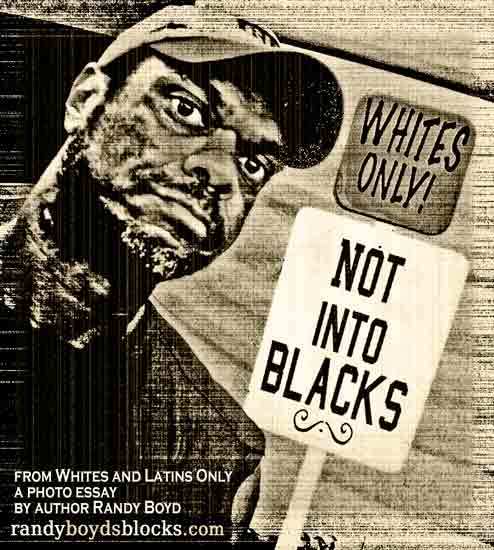 “How might black Americans view homosexuality if blacks are no longer segregated from society by gay people declaring WHITES and LATINS ONLY?” —from Poll Dancing with Blacks and Gays

Also check out: My Racist Gay World in words:
The Hypocrisy of Gay Civil Rights
Rising Up Over Gay Racism
Dear Queers, Give Black People Blue Jeans!
10 Ways to Get Blacks To Support Gay Marriage
Poll Dancing with Blacks and Gays
Gay Rights and Civil Wrongs