I began 1980 as a high school senior in Indianapolis, Indiana, and ended the year as a freshman yell leader at USC in Los Angeles.

Prior to college, I had no previous cheerleading experience and had never stepped foot in California, not even for a campus visit.

So how does a black kid from the Midwest with zero prior experience become a cheerleader for two crosstown rivals during one college career?

How was I able to try out for college cheerleading a total of five times and make it five times?

How was I fortunate enough to cheer for Marcus Allen of USC during his 1981 Heisman Trophy season, and Reggie Miller of UCLA during his 1985 NIT Championship run?

If only they knew why … lol 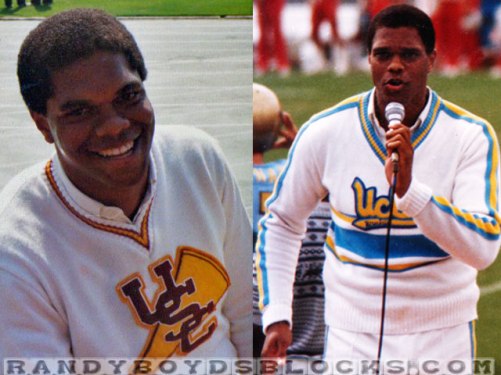 In college, I never told anyone that, since age seven, I had been a student of cheerleading. They didn’t know my sister taught me cheerleading one fateful day in my childhood, a day that transformed me into … a cheerleader for life.

From that day forward, I studied cheerleaders like a Jedi knight in training. I practiced their moves, dissected their actions, became a commentator and a connoisseur, all while growing up in a male-dominated family whose lives revolved around sports. Even while I played basketball, football, baseball, tennis and soccer.

Cheerleading became as much a part of my life as sports. At home, usually in private, I practiced what I studied. My imaginary sidelines became a refuge from the very cruel realities of my environment.

In college, I never spoke of those cruel realities. In part, because the job of a cheerleader is to only represent the best of yourself, your school, your world. And since, I was a cheerleader from month two of college, I was all about living out the role of my lifetime, a role for which I had been prepping since age seven, unbeknownst to anyone in college.

After being called nigger at USC and discovering I was more “state-school material,” I eventually transferred to UCLA, where it was only natural to continue doing what I do, so I became, duh!, a UCLA cheerleader.

The final score: five years in college—two at USC, three at UCLA—four years spent as a cheerleader. The only year I wasn’t on the sidelines was the year I transferred. During my time, I was fortunate to experience one Rose Bowl, two Fiesta Bowls, a first round NCAA basketball exit (USC), and a NIT basketball championship in Madison Square Garden in New York (UCLA). And some really great games, buzzer beaters, traveling, stadiums and cheermates.

As for loyalty, I grew up in Indiana, so I’ll always be a Hoosier at heart. But when it comes to Trojans vs. Bruins. Let’s just say I root for the school for which I was better suited, and that served me better.